What does Sunday trading really cost hospitality businesses? The data is in.

Deputy recently analysed the sales and workforce data of over 1,200 hospitality businesses to see how their daily activities match up with the debate on penalty rates. The insights are below:

Despite higher sales vs weekdays (see point 9) staffing levels remain constant from Thursday to Saturday. The average hospitality business adds one employee to manage increasing demand Thursday through Saturday. Sundays see two employees removed from the roster despite b increases in sales over the weekday average. 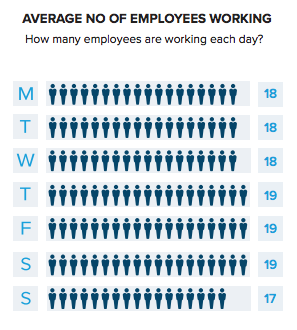 2 Women are employed more than men on Sundays

Women make up 53% of rostered staff on a Sunday. These figures match exactly with recent research by The Australia Institute’s Centre for Future Work, which also found 53% of workers in hospitality are female.

Businesses are relying on younger (under 23 years old) staff later in the week to manage increased demand. As the week progresses younger employees make up a larger proportion of the workforce. By Saturday almost a third of all workers are 22 or under.

Sundays shows hiring of younger workers returning to levels seen at the start of the week. Businesses move from rostering 1 in 3 younger workers on a Saturday to only 1 in 5 on Sundays.

The majority of employees aged 40 and over start their shifts in the mornings. For employees aged under 40 shifts start mostly in both mornings and early evening. 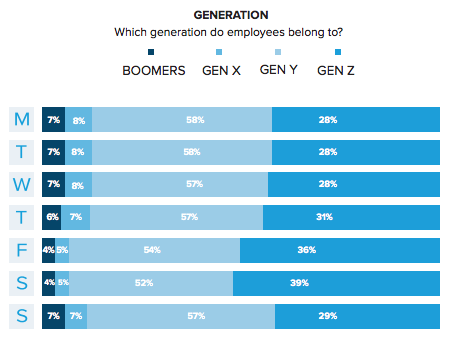 8 Sales outpace labour costs by over 2:1 on all days of the week

There is no major difference in sales vs labour costs on weekdays vs weekends. Due to a sharp increase in sales Saturdays are the most favourable day of the week when comparing sales to labour. 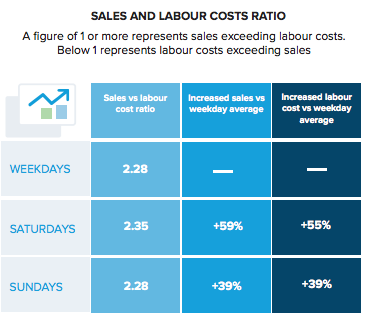 9 Increases in labour costs are outpaced by increases in sales over the weekend.

The ratio between sales and labour costs doesn’t change on a Sunday. Both increase at the same rate of 39%.

About the authorDeputy’s content team works closely with business owners, managers, and their employees to create helpful articles about how to make their worklife easier.