If you’re operating a business in California, compliance isn’t something that can be taken lightly. This was a costly lesson Victoria’s Secret learned when they agreed to pay out $12 million to settle claims that they had underpaid employees that were working on-call shifts.

While California does provide some labor protections for employees that work on-call shifts, it has yet to adopt a state-wide predictive scheduling law. That hasn’t stopped three major cities in the Golden State from enacting their own municipal ordinances with similar mandates. 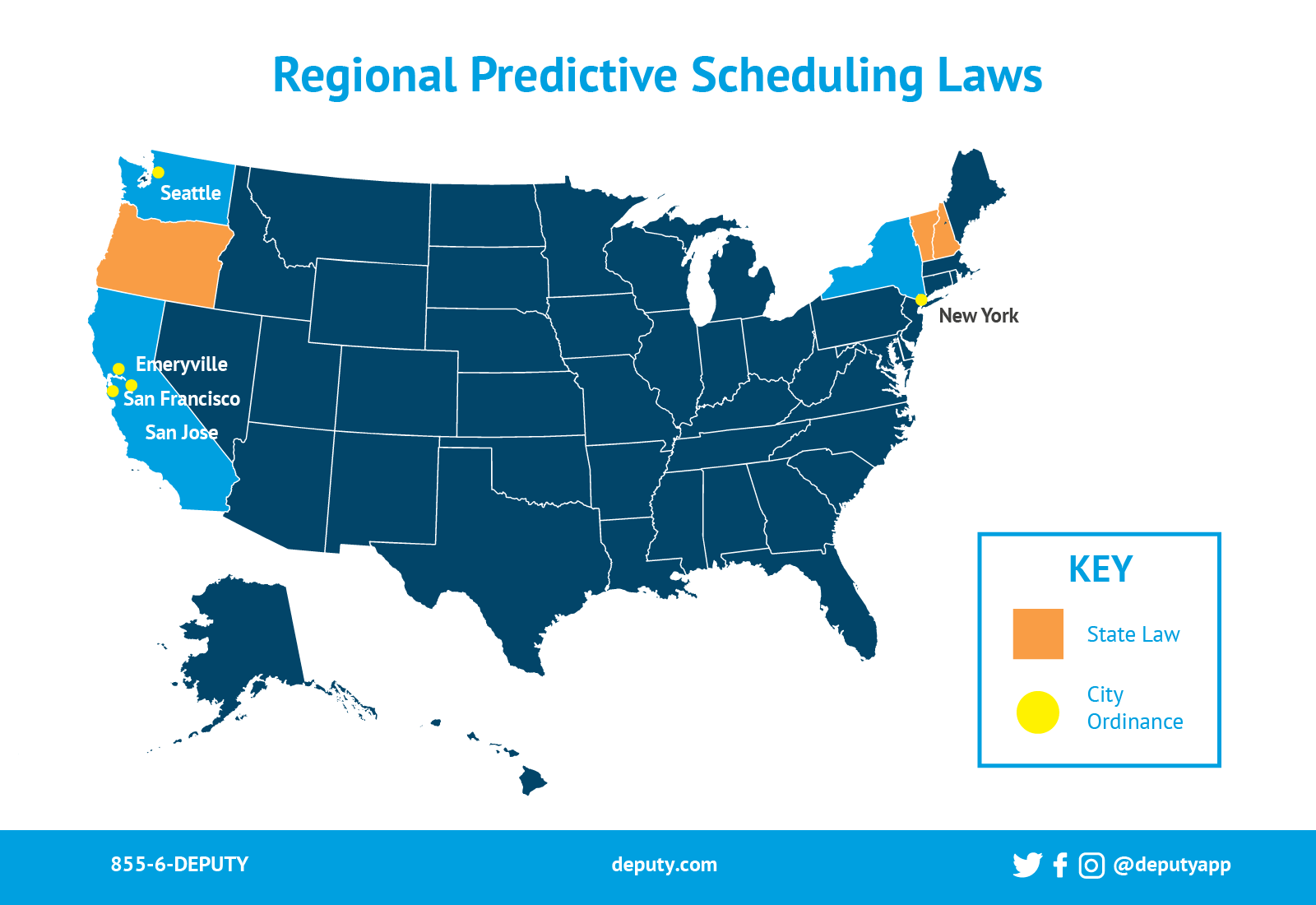 Which Businesses Are Affected
The San Francisco law applies to retail establishments that operate in at least 40 locations worldwide and employ 20 or more people in San Francisco.

Employers should first figure out whether they fall under the category of a retail establishment. The law is written so that it applies to as many businesses as possible and employers are considered operating a retail establishment if they have at least two of the following characteristics: a trademark, uniform apparel, standardized signage, standardized interior decor, or a standardized array of merchandise. In this sense, it even applies to many fast food restaurants.

Requirements
Covered employers must meet a number of standard obligations:

As of July 1, 2017, Emeryville’s predictive scheduling law has been regulating the relationship between employee and employer. The legislation, which is called the Fair Workweek Ordinance, just ended its soft roll-out period, and businesses will now being to receive fines for violations. In a sense, the law greatly resembles the San Francisco ordinance.

Which Businesses Are Affected:
Emeryville retail and food service businesses that employ at least 56 people worldwide are covered under the law. Companies that have a collective bargaining agreement with a union are, however, exempt.

Requirements
Covered employers must meet a number of standard obligations:

San Jose
The San Jose restrictive scheduling ordinance, Opportunity To Work, is a lot thinner than the previously mentioned legislation. It passed via voter initiative during the November 2016 election and went into effect on March 13, 2017. The ordinance requires businesses to offer additional hours to part-time workers before hiring anyone full-time.

To learn about how Deputy can help you to fulfill your responsibilities under these predictive scheduling laws, download our informative eBook below.

Best Practices To Prepare And Comply With Predictive Scheduling laws

Business owners that continue to manually track and input schedules on the same old spreadsheet aren’t just relying on their ability to understand these compliance regulations, they’re gambling on the chance that they will never make a mistake. All it takes is a few unexpected sick days and an over-scheduling crisis to set you back potentially thousands of dollars in fines. That’s why it is imperative that employers find the right technology partner with the tools they need to streamline their compliance.

All records related to these regulations must be held for no less than three years and be available for any compliance investigations. With this in mind, you’ll also want tools that enable you to produce custom reports that meet the demands of any situation.

With all of these requirements, predictive scheduling laws can sound like a headache. Thankfully, the most advanced, intuitive, and cost-effective program on the market has all of the features you’ll need in one suite. Deputy provides built-in scheduling so you can easily create schedules, assign employees to shifts or shifts to employees, and sync schedules with payroll data to ensure accurate pay and control labor costs. To learn more, schedule a customized demo below to see it in action or sign- up for a free 30-day trial.