Dream Job vs. Reality: An Analysis 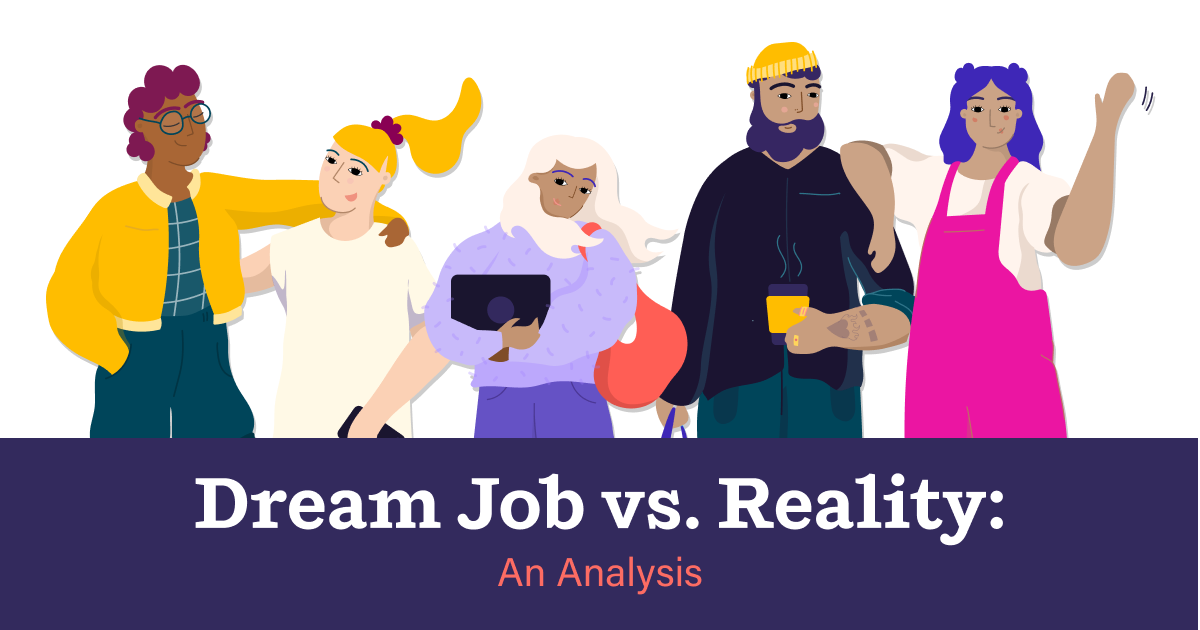 We’ve all heard this common question at some stage: “What do you want to be when you grow up?” Adults love to ask children about their aspirations for a job as soon as they can talk!

As children, the possibilities were limitless; some would say astronauts, while others would say firemen. There was the occasional ballet dancer and the very popular teacher or athlete. The sky was the limit!

The team at Deputy conducted a survey of 1,000 Americans in May 2022. We asked questions about what dream jobs respondents wanted as children, if they currently have that dream job, or if their dream job changed and they had a new dream job as adults.

Dreaming During your Day Job 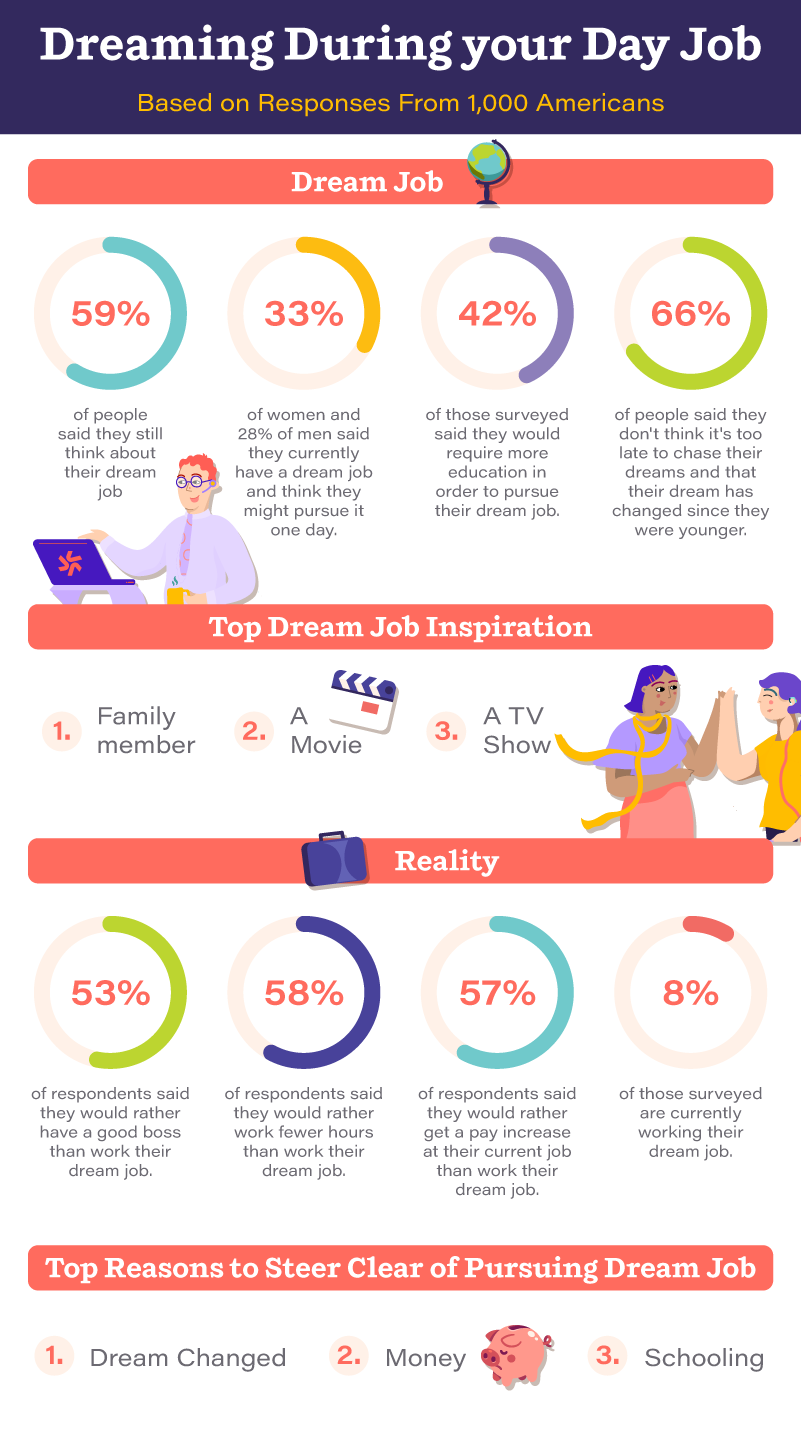 To start, we first wanted to know about how and why individuals came to their original dream professions. Some people may be enthralled by their family members' stories about what they do for a job, while others may watch shows like “Law & Order,” “Criminal Minds,” or “Grey's Anatomy” and think to themselves that they would be perfect for that job! It is almost a three-way tie with the most job inspiration coming from a family member, TV show, or movie.

Though 13% of respondents realized they would not pursue their dream job by the age of 18, there is never an age limit as to when you should stop pursuing a dream that you want to achieve. 66% of respondents believe it is not too late for them to keep chasing their dream job, and over half of the surveyed participants said that they still think about that dream job occasionally or often. 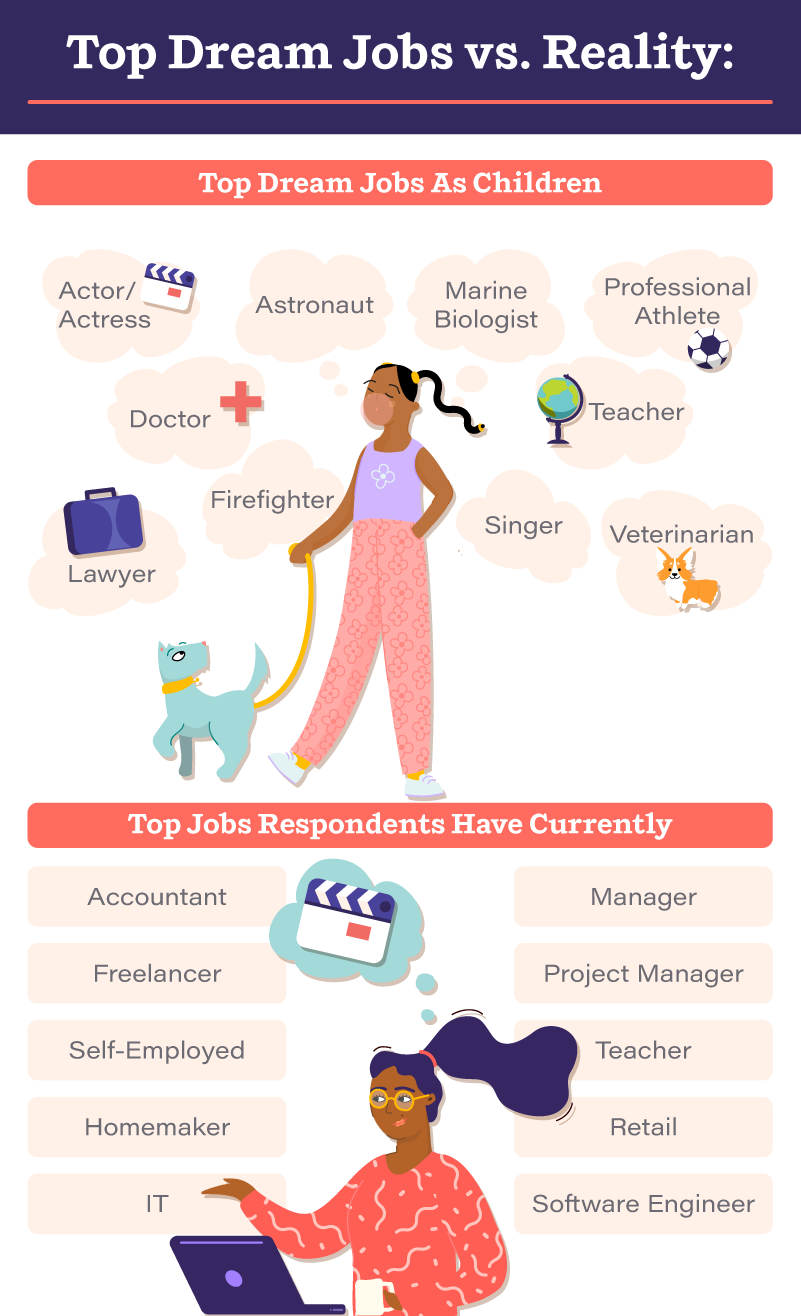 As children, it’s common to want to be just like someone we admired, whether they were a fictional character or a celebrity! However, not all inspiration comes from movies or books. A lot of times, children are inspired by those they interact with every day. Teachers have a huge impact on children and care deeply about their student's future success. That's why it’s no surprise that teaching ranks as the fifth most popular dream career.

Our survey also found former children are inspired by those who help others in need of care. Becoming a doctor or a firefighter are both among the top dream careers for children. Taking care of humans is incredibly important, but we can’t forget about the amazing animals in our world! For this reason, veterinarians and marine biologists are also ranked among the top dream jobs.

Maybe it's exploring something beyond the realms of our own planet, having a once-in-a-lifetime experience, or maybe just a love of Star Wars. We are told that the sky's the limit to our dreams, which may explain why becoming an astronaut is the second most popular childhood dream job.

Growing up, we see people on TV and in movies and may think that Hollywood is the perfect place for us. It was easy to imagine yourself on set, preparing for your role, so it’s easy to see why becoming an actor or actress ranked first on our list. For others, selling out arenas, whether for concerts or sporting events-as a professional singer or professional athlete, is the ultimate goal.

The occupations that we currently hold may not have been our dream jobs as children, but as your income, education, and professional pathways expand, you will discover jobs that better suit your lifestyle. 47% of people polled indicated they still would not pursue their dream job, even if money were not an issue. Despite this, only 8% of those polled are now employed in their ideal position. Teaching is the only career that was rated both as a top dream job and as a top job respondents currently have.

As we become more educated and pursue deeper studies in various disciplines, some of us may discover skills in areas such as business, finance, teaching, and other creative avenues that will guide us down the best career path. Many of our respondents have found their best fit in software, management, and retail.

53% of respondents said they would rather have a good boss than work their dream job, and it's even better if that boss is you! Some of the top jobs currently held by respondents mention being self-employed. As a freelancer or self-employed worker, you have the freedom to work on whatever you desire. In this way, being a homemaker could be considered a comparable job role!

Individuals who are highly educated in software and mathematics may consider working as an accountant, software engineer, or in IT. These careers are some of the most common positions currently held by those surveyed.

Working in retail rounds out the top 10 most common occupations among our correspondents. Retail is a great lifestyle job, and not just because of the flexible schedules. Working in retail enables you to strengthen your interpersonal skills, sales, and merchandising abilities. And there is always an opportunity for growth!

The Most Unique Job Paths 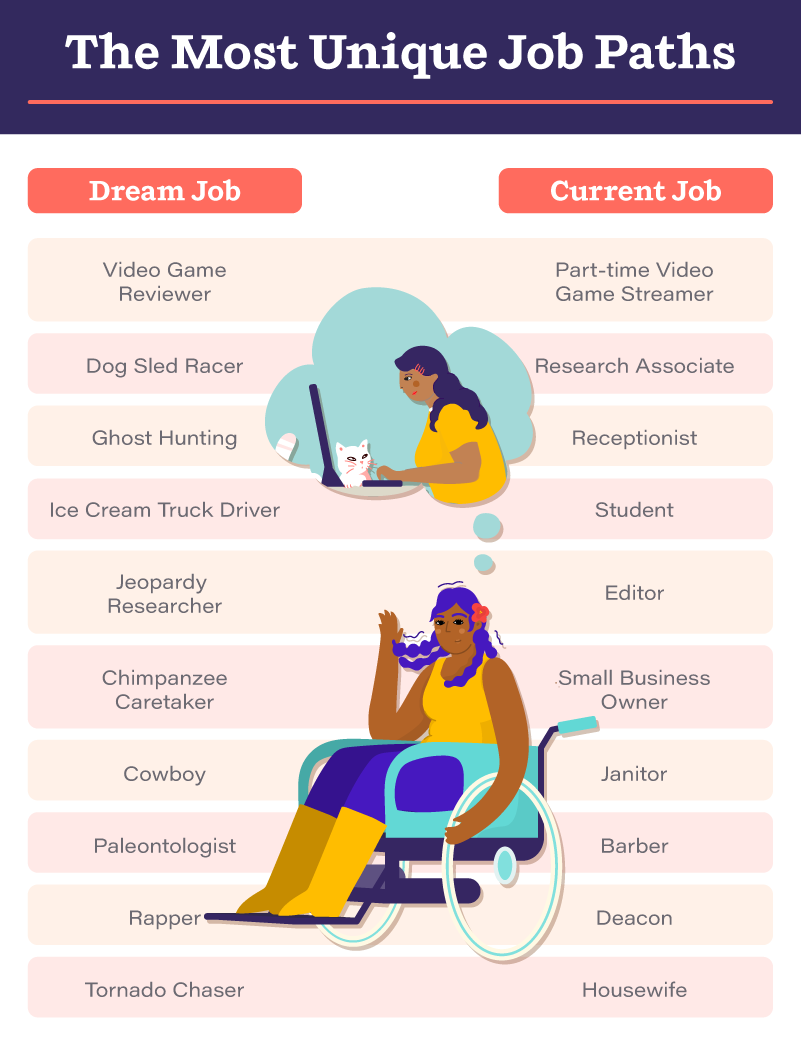 Some job paths stood out to us most; two of our respondents were even able to pursue their unique passion! One respondent had a childhood dream of being a video game reviewer, and they fulfilled that dream by becoming a part-time video game streamer.

Another respondent dreamt of becoming a “Jeopardy” researcher. This job description entails being responsible for assuring the correctness of all on-air information by researching the internet, books, and interviews. Though they did not become a “Jeopardy” researcher, they continued that passion by becoming an editor, which entails revising, correcting, formatting, and working on content for publications.

Some of the most unique dreamers ended up on significantly different paths professionally. Perhaps inspired by Ross from “Friends” or a love of “Jurassic Park,” a current barber's childhood dream job was to be a paleontologist!

Some of the more adrenaline-pumping dream jobs that we received included being a tornado chaser, a ghost hunter, a cowboy, and a dog sled racer. These participants are now working as a housewife, receptionist, janitor, and research associate, respectively.

Whether your childhood dream was to be an astronaut, an actor, or a paleontologist, we can all relate to having a dream job at some point in our lives. Some people may be fulfilling their dream jobs, while others may have discovered a new and unexpected path.

We can be grateful for the lessons and experiences that have led us to where we are now. Your current job and your dream job can be one in the same when you use Deputy's scheduling service to optimize your schedule.