The Most Popular Holiday Bonus in Every US State

All I Want for Xmas is a Holiday Bonus!

The holiday season tends to bring out the best in people, but which industries and states are the most generous at this magical time of year?

Every company has a different approach to the holidays. Depending on where you work, you might not get much time off during the jolliest season of the year. Retail workers, for example, get the short end of the proverbial stick most of the time.

Of course, no one wants to spend the days leading up to Christmas working overtime, but if you’re at the right company, there may be a prize on the other side that makes it all worth it.

Can you guess what it is?

If you said “holiday bonus,” you were right! Some industries demand more from their employees to keep up with the rush during the holiday season. In exchange, many companies compensate their staff for rising to the occasion with a hefty financial reward.

For this study, we discovered the best industries and states for Christmas bonuses across the country — as well as the perks Americans want most at this time of year.

Read on to find out which states and workplaces are the most generous throughout the U.S. and which ones could learn a thing or two from Ebenezer Scrooge.

It’s the season of giving 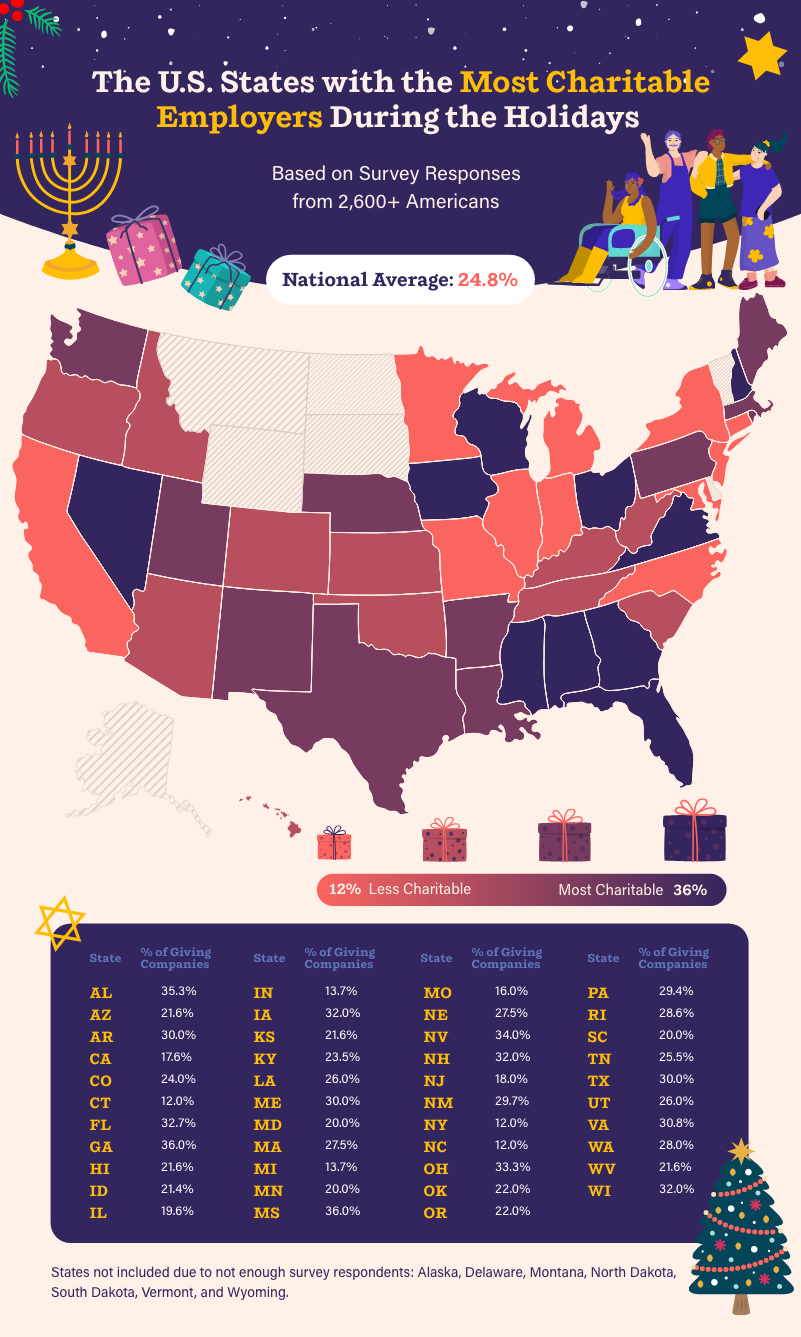 When it comes to charitable donations during the holidays, there’s nothing quite like southern hospitality. Georgia and Mississippi tie for first place out of all 50 states throughout the U.S., with 36% of Americans saying their companies make holiday donations.

In fact, Georgians have a reputation for being generous year-round. In 2019, GoFundMe found that Marietta, Georgia, was the most generous city in the country based on the number of donations per capita. People in the Peach State can rest easy knowing they won’t be put on Santa’s naughty list this year for being stingy!

The best holiday perks, according to Americans 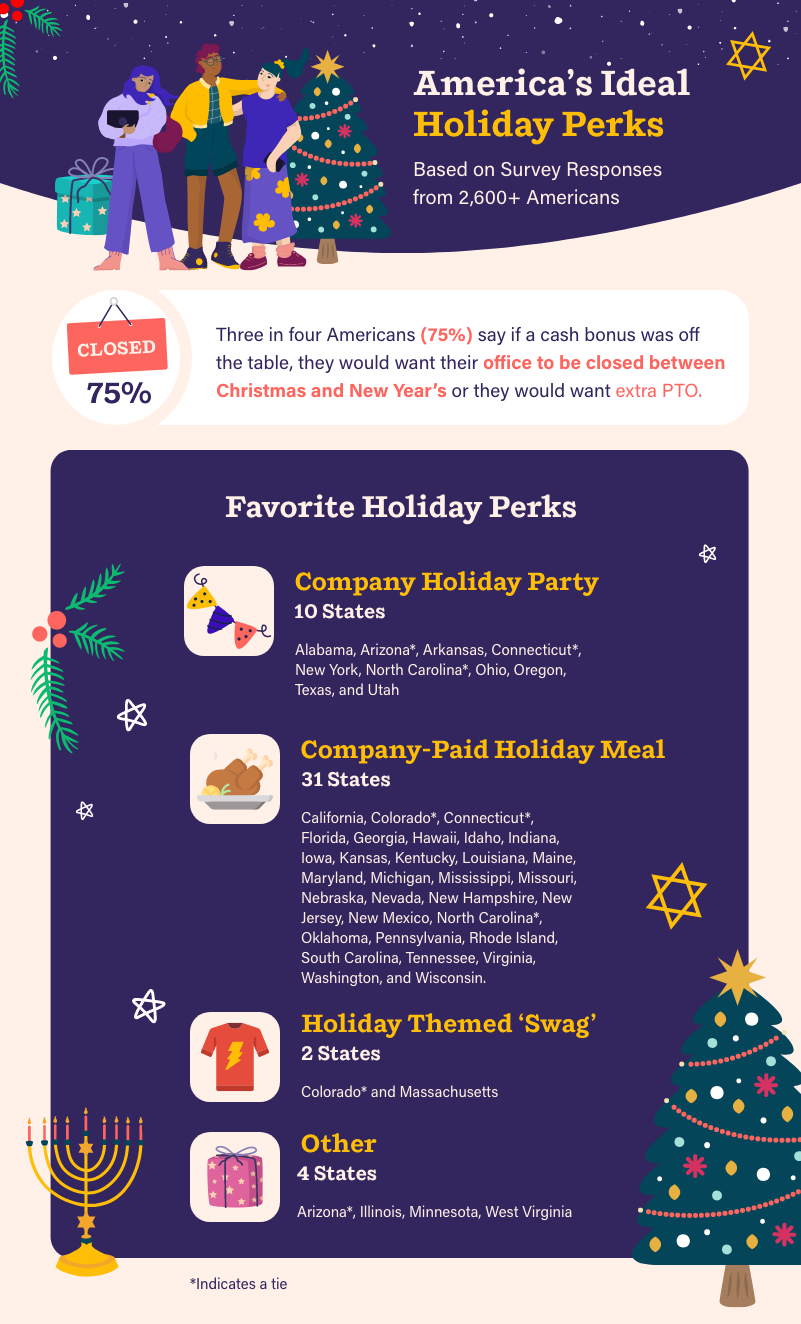 When cash isn’t on the table, staff holiday perks are the next best thing. Three in four Americans say that if a cash bonus is a no-go, they would like to close the office between Christmas and New Year’s or receive extra PTO for working during the holidays.

Other perks that Americans want during the holidays include company Christmas parties, paid meals, and holiday-themed ‘swag’ bags.

For many people in the workforce, nothing beats a hot meal on the company’s dime. The most sought-after perk throughout the U.S. is the company-paid meal, with residents in 31 states saying they prefer the coveted Christmas dinner over any other holiday perk on the menu.

Residents in Mississippi, Oklahoma, and Tennessee are leading the charge to the dinner table; at least 20% of respondents from each state say they would opt for a company holiday meal over anything else.

Company holiday parties come in second place for the most wanted perk during the most wonderful time of the year. Respondents from one-fifth of the country say that they would prefer to enjoy the presence of their coworkers over eggnog and sweets in place of a holiday bonus. Of those 10 states, Alabama, Texas, and Utah have the most party animals, with 14% of respondents from each bolting toward a holiday bash.

Coloradoans were split between a company-paid meal and holiday-themed swag if a bonus isn’t an option. Holiday-themed swag bags allow companies to reward their employees with something sentimental that they can use to spread a little more holiday cheer, such as candy, tree ornaments, and ugly Christmas sweaters. If a bonus isn’t in the budget this year, something with a little heart can go a long way.

Will you get a holiday bonus this year?

With many companies across different industries tightening their coin purses in response to the possibility of a recession, a holiday bonus is out of reach for many Americans this year, depending on where you live and in which industry you work.

When looking at different companies across the country, we found that finance remains a lucrative industry, as 15% of respondents in the finance and insurance sectors say they received a holiday bonus of $9,000 or more last year.

On the other hand, 43% of respondents working in the legal services industry say they rely on their holiday bonuses to get Christmas shopping done during the holidays. Overall, 62% of all respondents say they did not receive a Christmas bonus last year.

Many are still struggling from the aftermath of COVID-19 and its effects on the supply chain, among other factors, as some respondents claim to have missed out on Christmas bonuses during the past couple of years.

Residents in California (12%), Illinois (12%), and South Carolina (14%) are already feeling the impacts of a potential recession, as they are the states with the highest percentage of workers anticipating no holiday bonus this year. Connecticut and Massachusetts were hit the hardest by COVID-19, as 16% of respondents from both states say they lost holiday bonuses due to the pandemic.

The best holiday perks by industry

Some companies go all-out when it comes to rewarding their employees at the end of the year for a job well done. Respondents in the information technology industry say they’ve received outrageous staff holiday perks including MacBooks, iPads, and all-paid getaway vacations.

Educators reported receiving paid vacations to Montana, double pay during the holidays, and personalized gifts. Check out the interactive table to see what other industries have handed out during the holiday season!

If you ask most Americans what the best Christmas gift their company can give them is, many of them would tell you they'd like a hefty holiday bonus. Unfortunately, sometimes there are factors outside an employer's control, and they have to do the best with what they have. For many people, the next best thing is a company-paid meal with their favorite co-workers or a holiday party where they can finally cut loose in a corporate setting. As long as it's done in the spirit of giving, even a little bit can go a long way.

When the holiday season rolls around, many Americans begin requesting time off. With Deputy’s help and software, managers won’t have to stress about scheduling and managing everyone’s holiday availability — meaning they can get back to planning an amazing company party.

For this study, our team asked Americans across the country about their annual holiday bonuses and company perks. To accomplish this task, we surveyed more than 2,600 Americans for one week in November 2022 about their past staff holiday perks from employers and what they hope to receive in the future.