States with the Most Women-Owned Small Businesses

Women entrepreneurs are breaking barriers and making powerful strides across industries, communities, and neighborhoods — far beyond the glass ceilings they have to shatter just to celebrate opening day.

But where are women finding the most success? And where is the gender divide more apparent? Deputy wanted to discover the states with the most and least women-owned small businesses, uncover success stories, and examine the challenges women are still facing in entrepreneurship today.

So if you happen to run your own construction company, boutique store, or sports bar, or just wanted to see where other women are rising, read on to discover which states women in small businesses have found the most success.

This study did not include North Dakota and Rhode Island due to a lack of data for women-owned businesses in those respective states. Read on to find out which states have the most women in entrepreneurship.

States with the Most Women-Owned Small Businesses 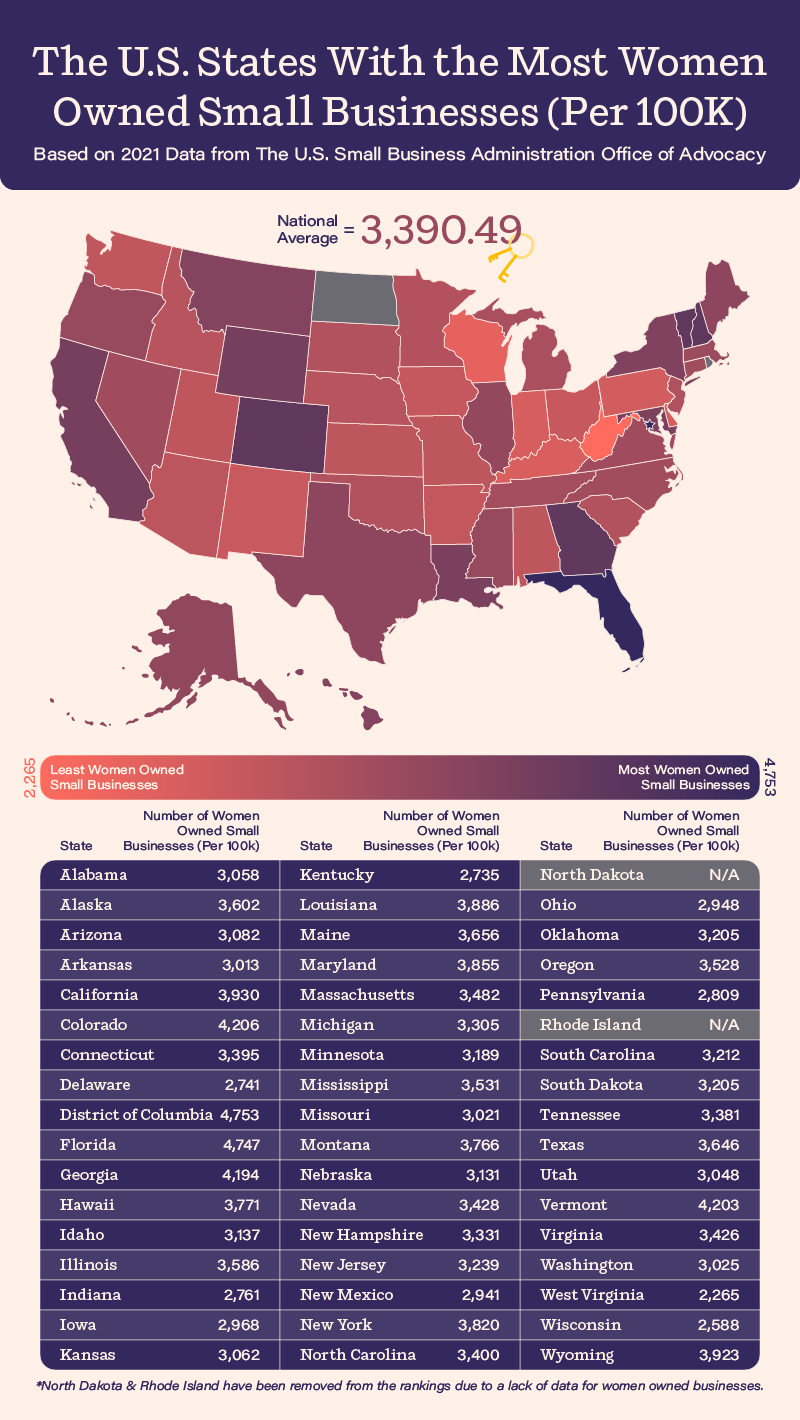 The District of Columbia ranks first with over 4,754 women-owned small businesses per 100k people. A D.C. entrepreneur Emilie Aries is the founder and CEO of Bossed Up, a career program designed for women and marginalized groups to give them the skills and tools they need to confidently enter leadership roles and progress in their respective career fields.

Florida ranks second and is home to female-owned businesses like Lil Roberts’ Xendoo, a cloud-based technology company that focuses on online bookkeeping and accounting for business owners. LMS General Contractors, with roots in both Florida and California, was started by Jennifer Todd, who was the youngest black woman to earn a CSLB (A) General Engineering license from the state of California.

Maryland and New York ranked ninth and tenth while across the Pacific, Hawaii placed eleventh as one of the top states with the most women-owned small businesses. The state of Hawaii has initiatives in place to support female entrepreneurship, rolling out programs for women business owners to network and hone their marketing and leadership skills.

U.S. States with the Most & Least Women-Owned Small Businesses 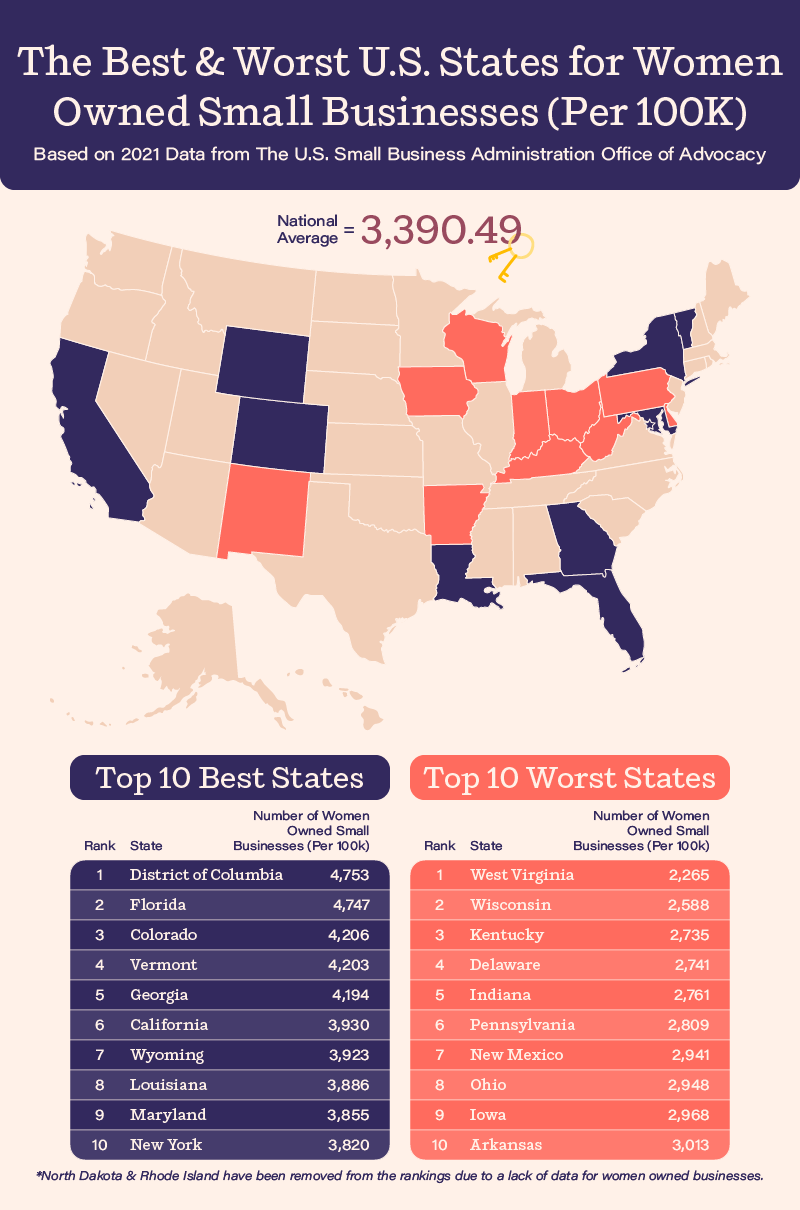 From healthcare to real estate to pharmaceuticals, California is the hub of an incredible array of industries. In San Diego, Wilson Turner Kosmo is a woman-owned law firm that values diversity as one of its greatest strengths, with 80% of its attorneys being women and 45% being minorities.

West Virginia has the least women-owned small businesses per 100k population, while Kentucky and Delaware place third and fourth, respectively. Southern states also have a worse gender pay gap overall, with females earning less than 78 cents on the dollar on average — compared to the national average of 82 cents for every dollar paid to a male.

Despite fewer women-owned small businesses, there are still female entrepreneurs pushing for change in these communities. For instance, in Wilmington, DE, Ayanna Khan, founder of the Delaware Black Chamber of Commerce, provides resources and capital to black business owners to foster economic opportunity and equity within the community. 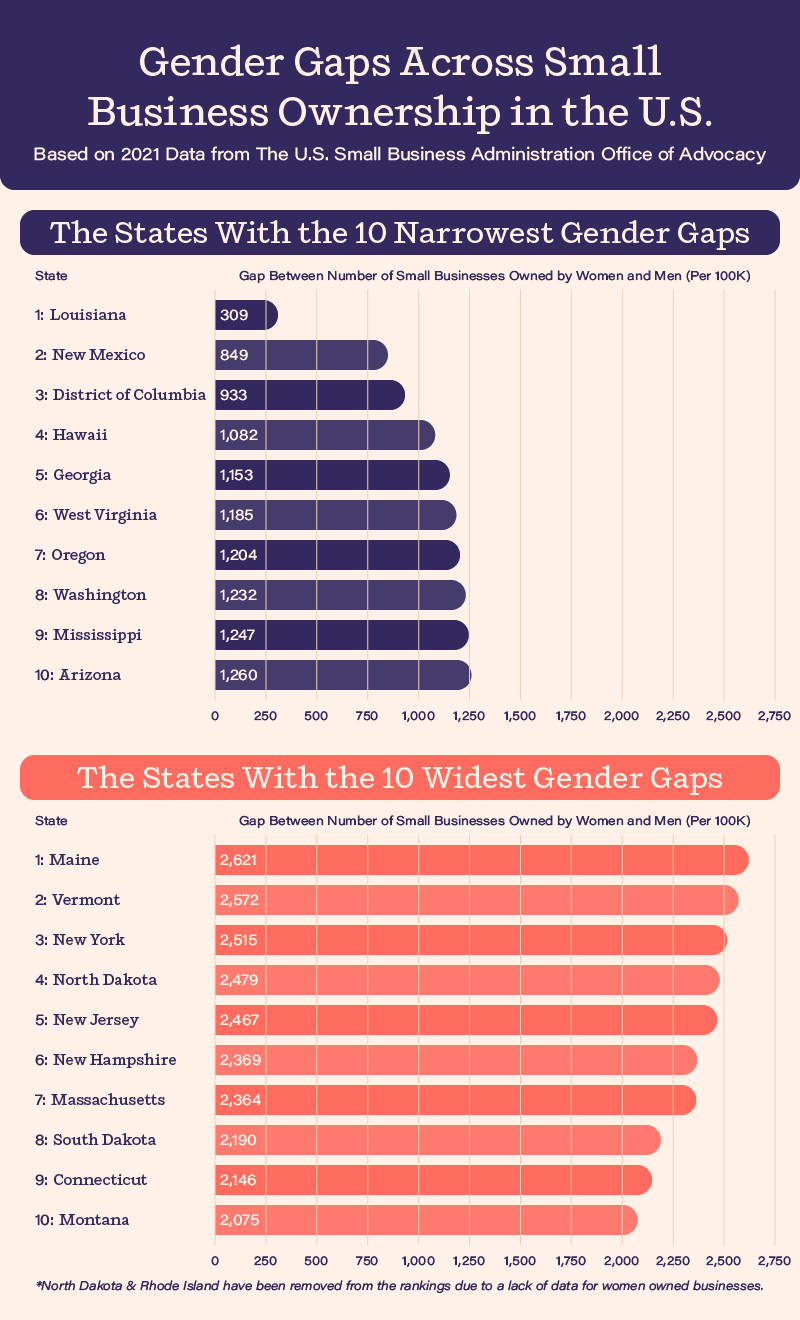 We wanted to provide an overview of the states with the smallest and largest gaps between men and women-owned small businesses across the country. While female entrepreneurship is growing in some states, it's clear that progress and fair wages still need to be accomplished across the board.

Louisiana ranks first as the state with the smallest gap between men-owned and women-owned small businesses with a gap of only 309 businesses per 100k population. New Mexico, the District of Columbia, and Hawaii follow in Louisiana's footsteps.

In comparison, Maine has the largest gap between men-owned and women-owned small businesses with 2,621 businesses per 100k people. A 2020 report compiled by the Permanent Commission on the Status of Women also shows that the gender wage gap persists in Maine. This puts women at a major disadvantage, especially when you take gender discrimination, childcare costs, and other social and economic factors into consideration.

New York ranks third as one of the states with the largest gaps between men-owned and women-owned small businesses. Female entrepreneurs face unique challenges, as a recent survey revealed more than half of female small business owners believe they are held to higher standards than men, with four in ten saying they were rejected for a Paycheck Protection Program loan.

Whether you’re the CEO of a clothing store in Houston or managing a healthcare company in D.C., women are facing and breaking down barriers across industries. To hear some of their stories and the challenges they’ve overcome, read our interview with 6 incredible entrepreneurs across hospitality and healthcare.

And to help your business flourish, read our article on 5 key resources for women owned businesses.

That wraps up our Women-Owned Small Business U.S. State ranking. Interested in diving deeper into the numbers, or curious how your state compares?

We’ve compiled our complete data study for all 50 U.S. states analyzed into the interactive data table below. Search for the state you call home or click on the heading of each column to sort by that category.