How strong is your workplace culture? And will it help you grow?

by Deputy Team, August 12, 2016 5 minutes read
HOME blog how strong is your workplace culture and will it help you grow

Corporate culture has evolved much further than a motto on the wall of the headquarters to a major competitive advantage.

So why define your company culture? And how do you develop one that attracts employees and clients while still providing ROI for your organization?

Read on to learn more about how you can marry a strong team with a winning strategy for business success. 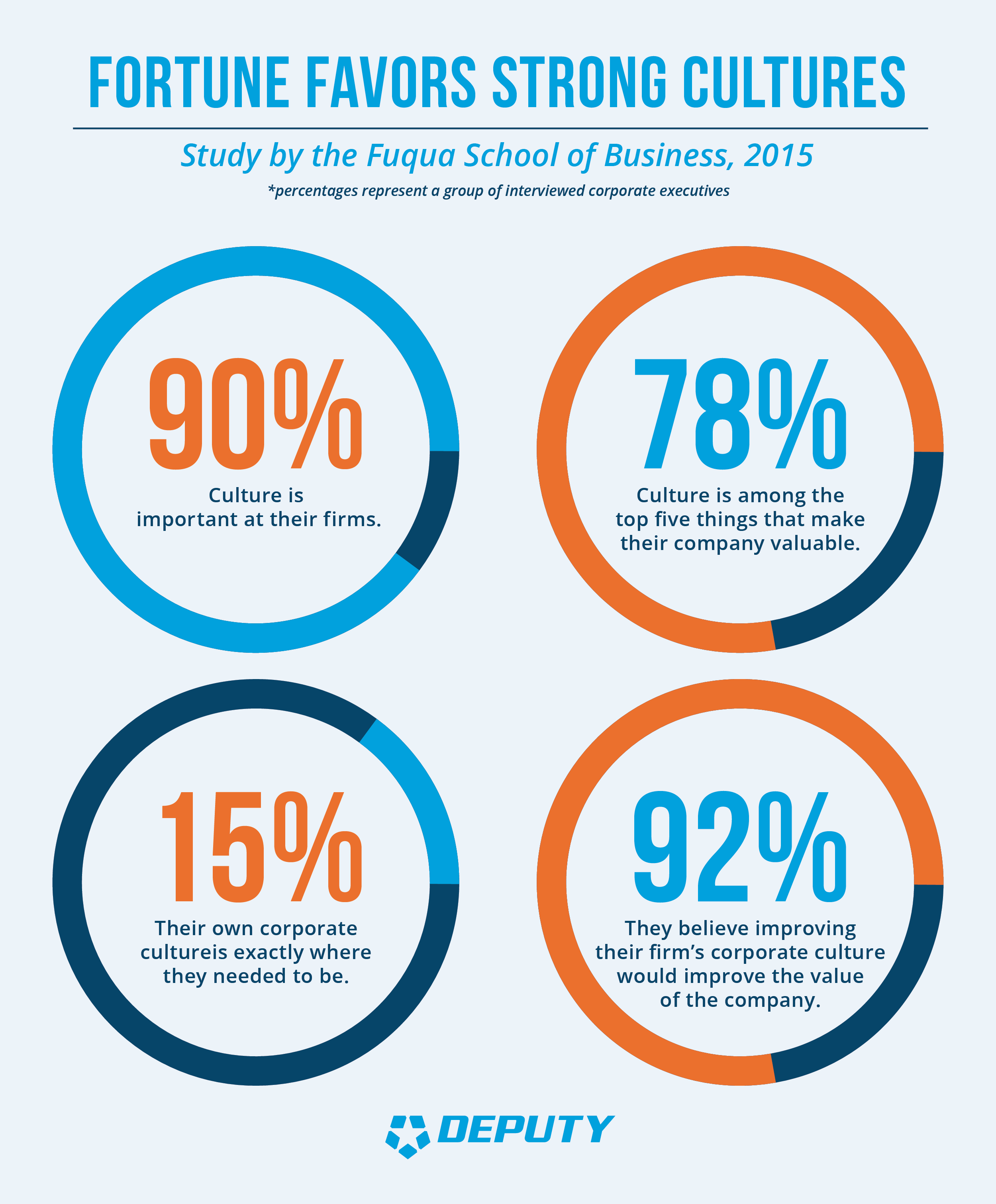 Clearly, companies are nuts about culture. But what do employees think?

Culture trumps many other monetary incentives or benefits, according to an employee engagement study by staffing company, Randstad US in 2015.

Nearly half of the people surveyed by Randstad felt the culture of their companies caused stress and dissatisfaction:

Clearly, there’s value in happy employees. But how about the bottom line? Does strong company culture translate into a real ROI?

Engaged employees can help companies outperform competitors by more than 200% according to research from employer review and hiring site, Glassdoor in 2015. Spending 10% more on employee engagement drives company profits up by $2,400 an employee a year. That means if you have 25 employees, you add $60,000 without taking out a single ad or adding another FTE.

And the next generation of employees, the millennials, are rewarding companies who provide true value to not only their careers, but to wider society with more interest, longer employment lengths, and better brand ambassadorship than companies who don’t.

In fact, a negative view of the culture and values can cause people to decide not to work for a specific company according to Deloitte’s 2015 millennial survey. Cultural keys all had a massive impact on employer choice, such as:

(And most of these don’t even require a monetary investment.) 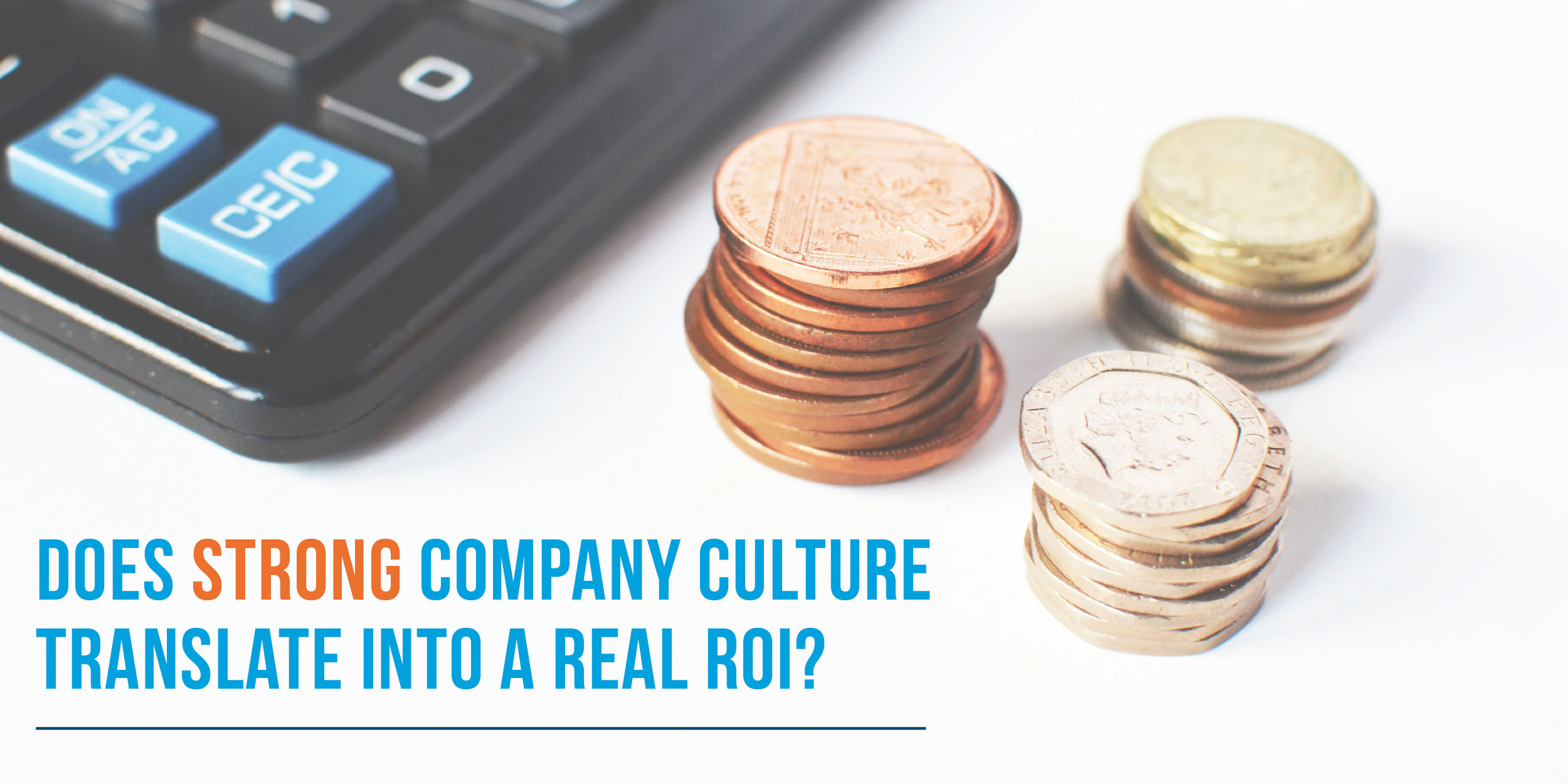 The features of a strong culture

The key to defining a culture for your company is to know who you are. Be honest about what kind of employee thrives in your organization and the features that make you proud of where you work. Defining what the culture of your company is more than just helpful for your branding work and internal communications. Strong values help to not only help guide decisions that jive with stated company goals, but can also guide you to sweet spot clients who are culturally aligned with your business and find sweet spot employees suited to help further your company’s goals.

Reject old-fashioned button-up company culture in favor of innovative thinking? Value employees who are passionate about the organization’s mission no matter what their rank? Reward employees that push the status quo and challenge convention but will never say “that’s not my job? (I know, we do!) Write them down and spread that message wide.

We’ve all heard of company cultures that we envy: QuikTrip investing in retail employees with higher salaries and benefits than their competitors which has resulted in a competitive advantage for both hiring and customer satisfaction. We’ve also heard stories of cultures within organizations that paint a less-rosy picture: queue The New York Times‘ exposé on the patchwork of experiences different employees had at retail giant and internet behemoth Amazon.

How to build a strong corporate culture

Social norms can be as powerful as written guidelines, especially when they come from groups of friends. And although we all have friends who we’ve found through happenstance or good fortune, most people’s social circles are ruled by the proximity principle.

Happy, productive employees tend to also be the most engaged in a company’s mission — and help you deliver not only a great experience to your internal clients (your employees), but also provide top-notch service to your external clients, too.