Most people lock into a 9am to 5pm schedule because it’s now the norm after generations of workers fought to get better work life balance. Here we review the history and look into the future.

Before the industrial revolution most workers worked all day long – and then some.

If your job was outdoors, you were ready to go at the crack of dawn and you worked in the fields until the sun went down again.

Some people didn’t see the light of day and worked crazy long hours underground or inside, with feeble oil lamp light.

Most people worked at least six days a week.

After work you dragged your tired self through the dark to home, where you ate by the glow of a candle or fireplace. If you were lucky.

(Remember: the middle class didn’t really exist until recent history, so most people were labourers, not quill pushers.)

The industrial revolution and the invention of the late-late-shift

By 1760, most people were still working six days a week and thanks to technologies such as the steam engine and spinning machines they were getting a lot more done.

While steam heralded a revolution in industrial productivity, it was the introduction of gas lighting in 1812 that made round the clock production and late night trading massively popular.

As people worked shifts of 10-16 hours, it was common for factories to be manned by two shifts.

By the 1820s businesses managers began campaigning for a five day week so they (and their newly minted middle-class families) could have more social time. Still, most people worked up to 10 hours a day.

A fairly successful mill manager and socialist in England called Robert Owen wrote a series of essays that captured the new mindset, including better education regardless of ‘class’, infant schools to help mothers return to work sooner, higher real wages and the mathematically-balanced idea of the 8-hour working day.

How the 8-hour working day was won

Modern remix of the working week

Modern workers average just under nine hours’ work each day, sleep for less than eight and enjoy a couple of hours of leisure.

Meanwhile, we’re seeing a greater casualization of the workforce, with some pundits even predicting that half of the modern workforce will be freelance by 2020.

And shift work will become even more common.

In great news for Generation Xers starting to feel tired of the 5-to-6-day working week in their middle age, researchers at the Faculty of Business and Economics at the University of Melbourne recently announced that they might want to cut back to three days a week.

Their reasoning? Working part time three days a week is more than enough to keep the brain healthily stimulated, but every hour a 40-plus brain has to work longer, its cognitive function declines and stress and exhaustion kick in.

What’s next? Dropping to a 30-hour work week and below

An Australia Institute report found that on average, full time workers put in six hours of unpaid overtime each week.

Though those extra hours aren’t worthwhile claims a study by John Pencavel of Stanford University, which revealed that productivity tanks when we put in long hours.

So maybe Sweden is on to something with the introduction in 2015 of a six hour working day?

Tim Ferriss has been saying for years that we can have more fulfilling lives by working just four hours each week. Of course, if you’re going to follow Tim’s path, you’ll need to outsource most of your work…

…or give it to a machine to do.

Stuart Ridley Stuart helps edit the Deputy blog, inspiring and leading the team in creating innovative content for our readers. 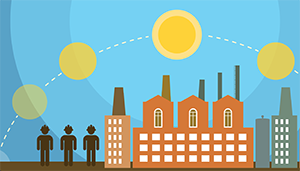